As usual we will not have a formal meeting in December. We will meet for some informal drinks on Wednesday 16th December at 8pm in The Swan on Kirkgate in Cockermouth.

I hope to see you there.

Posted by Chris at 10:38 am No comments: Links to this post

Our next meeting is on Tuesday 24th November. This month Robin Leadbeater will be giving us a talk;

"An Introduction to Variable Stars"

How and why many stars vary in brightness, and the vital role of the amateur observer in studying them

Posted by Chris at 8:38 pm No comments: Links to this post

Our next meeting is on Tuesday 27th October and we have a visiting speaker Dr Ian Bradley from the Lancaster University department of Physics, who will be speaking on the subject "Every picture tells a (scientific) story"

The meeting starts at 7.30pm

Posted by Chris at 5:48 pm No comments: Links to this post

Don't forget there is a total eclipse of the moon tonight. You'll need to be up in the early hours to see this one as it starts around 2am.

As usual Stuart has lots of useful information about observing the event and other things in the sky over on his Cumbrian Sky blog. .

If you take any pictures of the eclipse bring them along to our meeting on Tuesday night.

Posted by Chris at 4:06 pm No comments: Links to this post

Our next meeting is on Tuesday 29th September. As the nights are drawing in, we are starting our autumn season with a few meetings which are particularly aimed at beginners.

This month we will be looking at the equipment used for astronomy. You don't need anything expensive to get started - there is plenty to see just with your eyes, or some simple binoculars. However it's not long before everyone starts to ask "which telescope should I buy?". There is a huge range of options available which can seem overwhelming and we can give you plenty of advice. 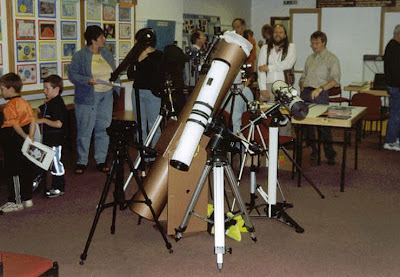 At our equipment meeting we'll have a range telescopes available to explain the different types and features. We will cover the basics of how telescopes work and consider some of the other factors that you need to think about when choosing a telescope. It's also a great opportunity to get some practical advice on using your own telescope so if you want to get more from the equipment you've already got bring it along.

Over the coming months we'll turn our attention to finding our way around the night sky and starting out in astrophotography.

As always we will also be reviewing the latest news and images from the world of astronomy and space exploration.

I hope to see you there, 7.30pm at St Joseph's Church Hall, Cockermouth.

Posted by Chris at 7:45 am No comments: Links to this post

Just a reminder that there is no meeting tonight. Our next meeting is at the end of September.

Posted by Chris at 4:14 pm No comments: Links to this post

We have our June meeting this evening. Stuart Atkinson from Eddington Astronomical Society will be giving us a guide to observing and photographing noctilucent clouds. These glowing clouds are visible at this time of year high in the atmosphere at night.

As usual the meeting starts at 7.30pm.

Posted by Chris at 2:12 pm No comments: Links to this post

Tomorrow night (Tuesday 26th May), is our Annual General Meeting. That means as well as our usual round up of space and astronomy news we will also do the formal business of presenting our accounts, electing the committee etc.

It is also a good opportunity to look back at the last year and discuss what we would like to do over the coming year. So please come along with your ideas and requests.

We don't have a formal talk this month, but there will be time to show any photos you may have taken, so please bring them along, preferably on a USB stick

Posted by Chris at 6:59 pm No comments: Links to this post

Email ThisBlogThis!Share to TwitterShare to FacebookShare to Pinterest
Labels: AGM

The next CAS meeting is Tuesday 28th April and we are privileged to have another visiting speaker, Dr John Davies to speak on the subject of Infrared Astronomy From Space.

John has played a significant role in UK research into Infrared Astronomy, working both at the Royal Observatory Edinburgh and in Hawai'i on the UKIRT.

The meeting starts at 7.30pm as usual in St Joseph's Church Hall, Cockermouth. All are welcome.

Posted by Chris at 9:01 pm No comments: Links to this post

This Tuesday, 31st March 7.30pm, is our next CAS Meeting. We'll be having our usual news update, including a report on the March Solar eclipse. The our topic of the month is Asteroids, including the latest from NASA's Dawn mission to Ceres.
If you have any pictures from the Solar Eclipse, or any other astronomical images you want to share please bring them along.

Posted by Chris at 12:48 pm No comments: Links to this post

We did manage to see some the solar eclipse from Cockermouth this morning, much to the delight of everyone who came along to Memorial Gardens.

The morning started early, with three society members arriving around 8am to set up, joined a short time later by a photographer from the News and Star. We were met with skies heavy with cloud, and a forecast that didn't look promising. However, as the saying goes, "the only guarantee in astronomy is, if you don't look you definitely won't see anything!". So we set up 'scopes and waited for the crowds to arrive and the clouds to clear.

Soon the people started to arrive, or at least notice us loitering in the park. With no prospect of showing them anything through our scopes at least we are able to keep up with progress on the Internet, and hand out some BBC Stargazing LIVE leaflets.

As the time of maximum eclipse approached at 9.30am the sky was noticeably darker and cooler and there was a hint of the "eclipse breeze" being researched by the University of Reading. Totality was observed over the Internet, live from an aircraft above the Faroe Isles.

Then the sky started to brighten. At first, because less of the Sun was blocked out by the moon, but then we realised that the clouds were breaking up. The lower level of cloud had gaps which showed brighter patches of cloud above. Then, suddenly, we saw the eclipsed sun through the clouds. Just a second or so, but enough to raise a cheer from the gathered crowd.

After that spirits rose, and we were eagerly watching gaps in the clouds drifting across the sky, willing them to move to just the right place to reveal the sun again. Some did, and before long we were starting to capture images.

Eventually the cloud was thin enough to require the eclipse glasses to view the Sun safely. Special filters went on the the cameras. Unfortunately there wasn't enough time to align telescopes.

The gaps continued to align with the sun, giving us views for as long as 30 seconds through our eclipse glasses, as the moon gradually moved away from the Sun.

So, overall a successful morning. Yes it would have been nice to bask in glorious sunshine for the whole event, but this is Cumbria! Given the forecast we had I think we definitely came out on top.

I'm sure there will be more photos to come, watch this space.

Posted by Chris at 4:35 pm No comments: Links to this post

This Friday is the Solar Eclipse. For Cockermouth the moon will cover around 90% of the surface of the Sun. While it will not go dark you can see the eclipse safely with special telescopes, filters and eclipse glasses, all of which will be available at our event. We will be in Memorial Gardens, Cockermouth from about 8am on Friday with the eclipse itself starting around 8.30am.

The BBC Stargazing LIVE series will also air this week with plenty more information about the eclipse and other astronomy topics. 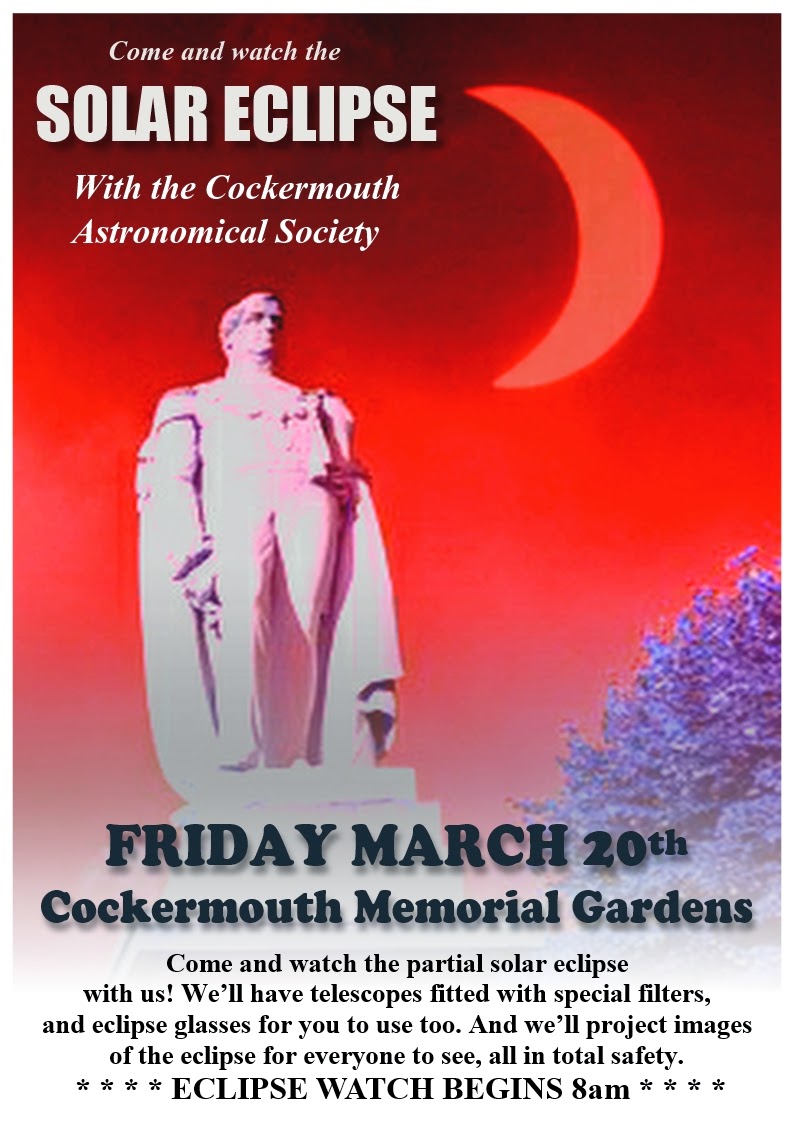 Details of the event are also available on our Facebook page.

REMEMBER: Never look directly at the Sun with any type of instrument (telescope or binoculars) you will seriously damage you eyes. Normal sunglasses or smoked glass are not suitable for eclipse viewing as they do not provide adequate protection from the Sun.
Posted by Chris at 12:34 pm No comments: Links to this post

This Friday, 6th March, we will be holding a public observing session in association Cumbria Wildlife Trust at their recently acquired Eycott Hill reserve.

We will be on the site from 7.30pm to observe Jupiter and the (almost full) Moon rising. If you are able to bring a telescope along please contact me so that I've got an idea of the number of telescopes we will have available. If you'd just like to come along and take part, that's fine too, please see the details of the event on the Cumbria Wildlife Trust website and book with them. There is no charge for the event from either CWT or CAS.

This map shows directions to the event. Basically turn off the A66 at The Sportsman Inn and follow the road through the hamlet of Berrier. The site is just outside the hamlet on the left.

Chris
Posted by Chris at 6:30 pm No comments: Links to this post

Just a quick reminder that our February meeting is tomorrow night (24th February), at 7.30pm. This month we'll be looking at comets, as well as a look ahead to next month's solar eclipse.


Posted by Chris at 8:53 pm No comments: Links to this post

Our first meeting of 2015 is on Tuesday 27th January at 7.30pm at St Joseph's Church Hall, Cockermouth.

This month we have a guest speaker, Professor Ian Robson, from the Royal Observatory, Edinburgh who will be giving us a talk on "Active Galaxies and Supermassive Black Holes".

Following that we will have a look at the latest space and astronomy news as well as a look ahead to 2015, which promises to be an interesting year for astronomy.

Posted by Chris at 9:49 am No comments: Links to this post