Comet ISON has really given us lots of drama over the last few days. On Thursday as it reached its closest approach to the Sun it seemed to disintegrate and fade. Something appeared around the other side of the Sun although much fainter. Many experts wrote ISON of at this point, declaring what remained as something less than a 'proper comet'.

Then on Friday the 'Ghost of ISON' looked to brighten significantly, prompting hope that there was a comet of some type remaining. Perhaps we would so something in our morning skies after all?
Today though, things have changed again. Have a look at this SOHO image below. 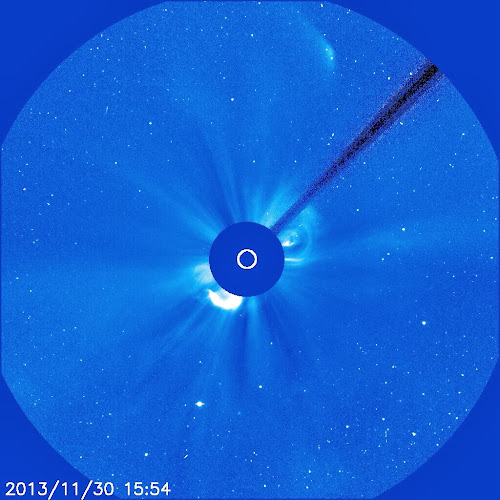 That remnant at the top of the image is fading rapidly. It will soon move out of the field of view of the SOHO telescope, in all likelihood we will not see it again. However, given everything that has happened with this comet to date, who knows.

For a more comprehensive round up of the story to date check out Stuart's latest report at Waiting for ISON. Phil Plait also has a nice round up of the last few days at Bad Astronomy. There are also loads of great videos and animations at the Planetary Society ISON Live Blog.

Don't forget that Comet Lovejoy is still there and visible below the Plough in the morning sky.

Unfortunately we have had to cancel our planned observing session tonight. Clouds around now and a poor forecast for later.

We will get some good weather sometime so keep an eye in the blog / Facebook / twitter for the next attempt.

It's been a tense evening following the fate of Comet ISON as it rounded the sun today. Thanks to up to the minute information and photos on Twitter the full drama has been easy to follow.

As early as Tuesday concerns were being raised as ISON dimmed suddenly. Then the comet started brightening again. As it approach the sun this evening however it seemed to break up, smearing along the line of its orbital path. There seemed little chance of it making it past the sun. 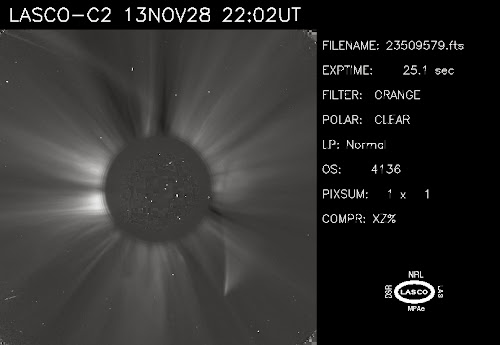 Then some hope . . . Something was clearly seen in images from the solar telescopes, perhaps the comet has survived? After a bit more analysis and more images most experts are agreed that the comet is effectively dead 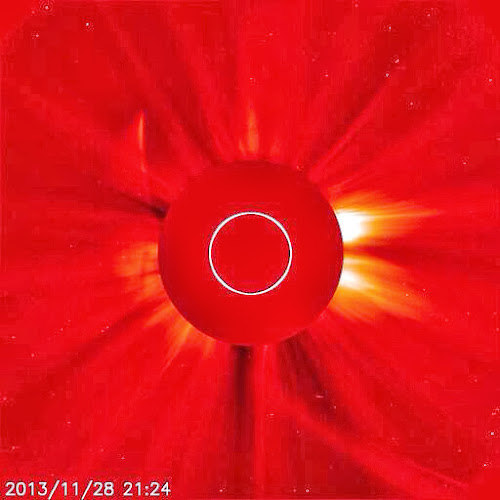 If, like me, you didn't manage to see the comet earlier this month then it looks like you'll have to write this one off. But there is still a comet visible in the night sky. It's time to track down Comet Lovejoy.
A big thanks should go to Stuart who has spent the last year keeping us all informed and inspired in the build up to ISON. His blog Waiting for ISON is still a great resource for observing and photographing comets, and of course has details on Comet Lovejoy. Thanks Stu.

This month we will be focusing on Comet ISON which promises to be a good sight in our winter skies. It has been visible in the early morning for a couple of weeks, although it has certainly been a challenge to observe it.

We'll look ahead to it's visibility during December as it emerges from the other side of the sun. Jeremy will be providing advice on how best to photograph it.

There will also be news on society observing events and, as we don't have a formal meeting in December, we will arrange our informal Christmas drinks.