Wave at Saturn next weekend

If you are a regular BBC Radio Cumbria listener you may have heard Stuart Atkinson from Kendal's Eddington Astronomical Society being interviewed on the breakfast show this morning. Stuart was talking about an upcoming NASA sponsored event encouraging everyone to get outside and 'wave at Saturn' to coincide with a planned photo of the Earth being taken from Saturn by the Cassini probe.

If you'd like to get involved with this you have two options. Firstly you could just go outside at 10.30pm on Friday 19th July, or if you want to make more of an evening of it, get along to the EAS event at Kendal Castle and join in with the moon and saturn observation as well as a collective 'wave' at the appropriate time. Stuart has more details over on his Cumbrian Sky blog. 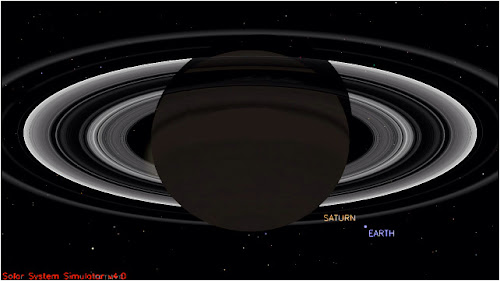 A simulated view of the picture Cassini will take
All this is, of course, just a bit of fun. The Cassini image will show the Earth as a small 'pale blue dot' just a few pixels across. So although we will all be in the picture, not details will be visible. But just knowing you are in a image taken by a probe sent by humans to a planet almost a billion miles away has got to be something to fire the imagination. It's an ideal opportunity for families to get involved in space exploration.
Posted by Chris at 9:21 pm