Inspired by other CAS members' images of PANSTARRS I thought I would have a go at capturing the comet in the skies above Cockermouth. As the skies were clear (again) last night I packed a small rucsac with camera, tripod and binoculars and headed up to the top of Slate Fell, which overlooks Cockermouth.

I quickly orientated myself and found PANSTARRS in the northwest using my 15 x 70 binoculars. Then I set up my DSLR on a tripod and, not being an expert on astroimaging, just starting playing around with some settings in manual mode. I started out at a wide angle and using an exposure time of 20 seconds. Once I'd found PANSTARRS in the frame I tried to fine tune the focus and exposure time. Then moving the camera slightly so that the comet was near the centre of the frame, I zoomed in to a longer focal length and tried again.

Anyway, I was reasonably pleased with the results . . .

When I got the images onto my computer I realised that I had also got M31 (The Andromeda Galaxy) in the same frame. The galaxy was about 10 degrees above the comet that evening and will be moving closer, on 3rd and 4th April it should be in the same binocular field of view! 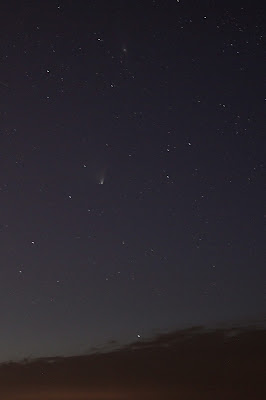 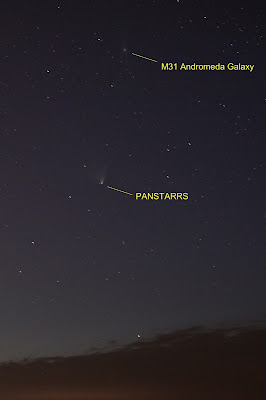 Slate Fell turned out to be a pretty good observing point and not too much of a hike in the dark from the Embleton Road. There was still a fair amount of light pollution from Cockermouth to the West and even looking East towards Keswick as in the image below.

If you're looking for a really nice image of PANSTARRS check out Stuart's latest image over on his Waiting for ISON blog. I won't spoil the surprise for you, just go and have a look!