Waiting for the comets

A massive thank you to Stuart Atkinson for an excellent talk tonight on the approaching comets that will hopefully grace our skies this year.

After the talk many people asked where they could get a copy of Stuart's finder charts for various dates. They are all on Stuart's excellent blog dedicated to the comets, Waiting for ISON.

Email ThisBlogThis!Share to TwitterShare to FacebookShare to Pinterest
Labels: comet

Just a reminder that the next CAS meeting is on Tuesday this week at 7.30pm.

Stuart Atkinson will be talking about "The Coming of the Comets!" so come along and be prepared for the appearance of Comet Panstarrs in March and then Ison in September. 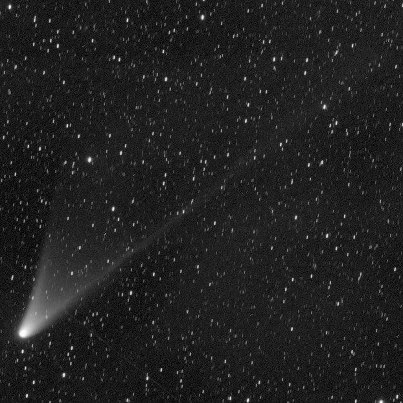 If anyone has any images or observation reports from the last month bring them along on a memory stick.  Maybe you've had a go at imaging Jupiter, Saturn or the Moon?  Or maybe you were lucky enough to follow the recent Near Earth Asteroid?

Jerry
Posted by Anonymous at 2:53 pm No comments:

You may have missed it in the comments on the previous post. CAS member Robin Leadbeater managed to capture Friday's asteroid (2012 DA14) on camera.


You can see the images as a video on YouTube here.

Well done Robin.  Did anyone else see the asteroid?
Posted by Chris at 10:49 am No comments:

LIVE video feed of the asteroid approach is available here.

Finder chart available at Heavens Above. The asteroid is approaching from the and will pass through The Plough at about 21:00h. You will need binoculars to see it.

Email ThisBlogThis!Share to TwitterShare to FacebookShare to Pinterest
Labels: Asteroid

Check all the usual news sources for information and videos of the massive meteor event over Russia this morning. I will links and more information when I get the chance.

Note: this is almost certainly unconnected with the flyby of asteroid 2012 DA14 tonight.

UPDATE: here's some links to the main stories about the meteor around the web.

Emily Lakdawalla at The Planetary Society has a comprehensive post with links to many of the videos and posts around the web.

Universe Today is conforming that the event is unrelated to the asteroid 2012 DA14 pass this evening. The post also contains some excellent satellite images of the event.

As usual Phil Plait at Bad Astronomy has a great summary with more videos and links of the event.

Email ThisBlogThis!Share to TwitterShare to FacebookShare to Pinterest
Labels: meteor

The next CAS meeting is on Tuesday 26th February and our guest speaker is Stuart Atkinson from Eddington Astronomy Society. His talk will be "The Coming of the Comets!" a look ahead to the potentially fantastic comets arriving in the spring and the autumn.

waitingforison.wordpress.com/
Posted by Anonymous at 8:22 pm No comments:

On Friday a small asteroid, about 50 metres across, will pass close to the Earth. This Near Earth Object is one of many that share similar orbits to the Earth and occasionally come close to our planet. On this occasion the orbit is very well known, allowing astronomers to confirm that there is NO CHANCE the object will hit the Earth. It will however come closer than the geostationary satellites that orbit around 20,000 miles above the Earth providing telecommunications services. 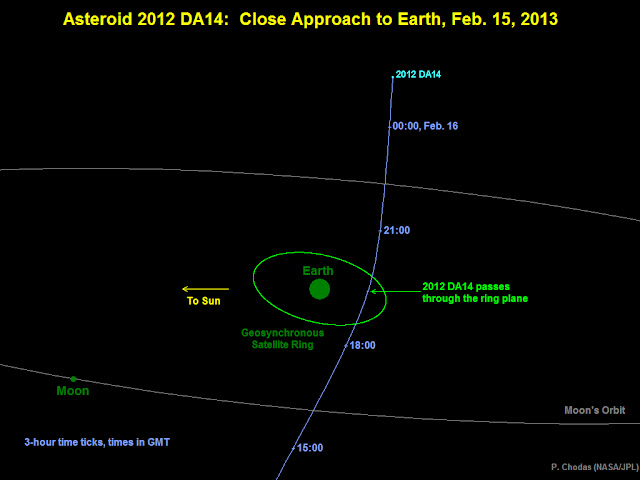 The asteroid known as 2012 DA14, will make closest approach of an asteroid of this size since astronomers have been closely tracking and measuring such objects. This will allow detailed measurement and mapping of the object by professional astronomers. SPACE.COM have a nice summary graphic of the event here.

So, given that it is such a close flyby, will amateur astronomers be able to see it? Well in theory, yes, it will reach magnitude 8, which is well within the reach of most amateur telescopes. However, as the asteroid will be approaching at around 5 miles per second, it will be moving very fast against the background stars and will be difficult to find and track. Experience amateurs will be trying to image it, and we can look forward to some interesting images over the weekend. If you want to try Sky and Telescope have a finder chart and details here. A number of websites are also planning to broadcast the event via live video including the Clay Centre Observatory in Massachusetts, USA.

More information on the asteroid and its approach can be found in these videos from NASA ScienceCast and The Planetary Society.

Update: Another excellent summary of this event from Phil Plait at Bad Astronomy.

This weekend is the second Dark Sky Discovery Weekend of the year at Low Gillerthwaite Field Centre in Ennerdale.

There will be the usual activities including a portable planetarium, talks and activities as well as observing after dark.

Chris
Posted by Chris at 7:24 am No comments: