Just a quick reminder that tomorrow night is out February meeting. I'll be giving a update on the latest state of the search for extrasolar planets as well as our usual roundup of the latest space and astronomy news including the latest on Comet Lulin. See you there at 7.30pm

Like Robin I struggled out of my bed at 3am in the hope of snapping Comet Lulin.

Alas the clear skies tunrned cloudy for about an hour and then fortunately cleared again just before I decided to give up!

Lulin is travelling really fast at about 4 degrees per day, very noticeable in the space of a short of observing session. Have a look as soon as you can before it begins to fade as it speeds away from the sun.

Posted by Anonymous at 7:16 am No comments: 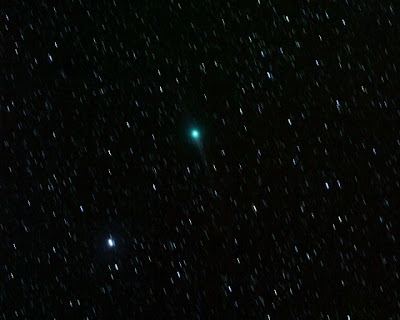 While the spectrograph was doing its stuff last night recording some data for a Pro/Am project, I took the opportunity around 2am to take a snap of Comet Lulin. Visually it was easy to spot as a fuzzy blob in the ubiquitous Liddl 10x50 binoculars. The 80mm wide field refractor showed a bit more detail and a hint of the tail and anti-tail.


Clear Skies
Robin
Posted by Robin at 2:33 pm No comments:

Look out for Lulin !

Comet Lulin is currently visible in Binoculars passing through the southern sky.

At the moment you need to stay up after midnight to see it but in the comming week it will move into the evening sky, passing below Saturn (in the south east around 11pm) on 23/24th February when it should at its maximum brightness, possibly even visible with the unaided eye from a dark site.

It then continues its westward path, becoming visible earlier in the evening until it passes close to Regulus on 27/28th. From then on it will fade rapidly as it rushes away from us to be lost in the waxing moonlight.

Detailed charts can be found on the Society for Popular Astronomy website and Sky and Telescope are publishing observing reports.

Robin
Posted by Robin at 1:13 pm No comments: