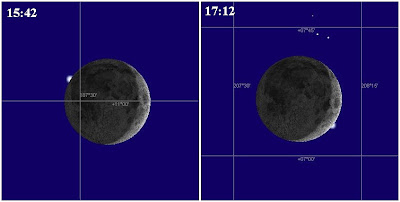 Hidden away in Dennis' observing notes for this month is a visual observing gem. Late Monday afternoon 1st December, the Moon will occult (pass in front of) the planet Venus, hiding it from view for an hour and a half. You will need a good low southern horizon though as all the action takes place betweeen just 11 and 7 degrees elevation.

For observers in Cockermouth, Venus is predicted to disappear behind the unlit side of the thin crescent moon when it is almost directly due South at 15:42 (The time will depend slightly on where you are, for example from Workington it will blink out about half a minute earlier, in Keswick half a minute later) and reappear at 17:12

The sky will still be quite bright at the start but I checked this afternoon and Venus will be easy to see with the unaided eye once you have spotted it. (Interestingly the thin crescent moon may prove harder to spot as its dark surface reflects far less sunlight than Venus' bright clouds)

Provided you can see low enough, you should have no problems spotting the re-emergence of Venus from behind the bright sunlit side of the moon in the much darker skies though at 17:12.

While you are watching, also look out for Jupiter nearby, just a few moon diameters up and slightly to the right.

This is also an excellent photo opportunity. If you manage to take any, send them to me and I will post them on the Blog.