The space shuttle Atlantis landed this week after a successful mission to ISS including the fitting of the ESA COLUMBUS module to the station.

As is traditional in these parts the weeks of fine clear (but cold!) nights were interrupted on the very night of the lunar eclipse on the morning of 21st February. It was an early morning event anyway, but there are as usual some excellent photos and videos out there on the net.

New Horizons, NASA's probe on its way to Pluto has passed the 9 astronomical unit mark. That's 1.35 billion km and almost at the orbit of Saturn.

The MESSENGER team have released some more excellent pictures of Mercury. This picture shows dark halos around two craters which may reveal something about different layers below the surface. Emily Lakdawala has more on this. 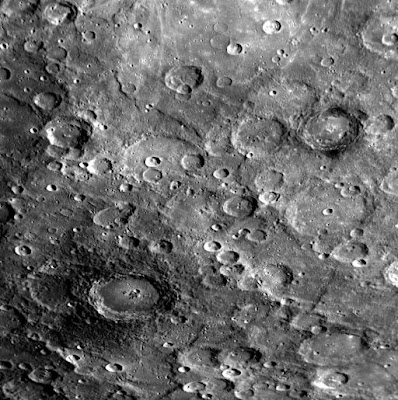 Our February meeting is this Tuesday 26th February. I won't be there, but Robin will step into the breach with news items and a round up of his activities over the winter. Ian Smith will also be explaining NASA's plans to return to the moon.