NASA have been testing a remote probe which could be the forerunner to a probe designed to explore the oceans of Europa, Jupiter's icy moon. Plenty of details in the Washington University press release. The team are also expecting to be able to draw close comparisons with Saturn's icy moon Enceladus.

It looks like UK astronomers have managed to secure some access for use of the Gemini telescopes which a couple of weeks ago looked doubtful. The story is covered by the e-astronomer and bbc news. 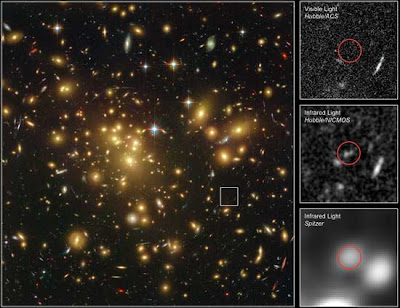 The Hubble and Spitzer space telescopes have again teamed up, this time to image the most distant galaxy ever seen. The galaxy is an estimates 12.8 billion light years away, and is only visible due to a gravitational lensing affect caused by an intervening galaxy cluster.

The European Space Agency Columbus module has been successfully attached to the International Space Station after an 8 hour space walk.

Also making the news in the last couple of days is the discovery of a triple asteroid in a near earth orbit. The discovery was made with radar observations from the Arecibo radio telescope. Emily Lakdawala has the story one the Planetary Society Blog.

Our next meeting is on 26th February, amongst other things Ian will be giving us a talk about NASA's planned return to the moon, and Robin will be showing us his latest scientific adventures!

Finally a request for help. One of our members is having difficulty setting up and aligning a Celestron Nextstar telescope. If you have a similar computerised scope and could spare some time to help please get in touch with me in the first instance at chris@cockermouthastronomy.co.uk

Hope you are enjoying the recent run of clear nights.