Hope no one minds me using this as an advertising service...

I'm thinking of selling my EQ5 mount (with electric drives). It's seen several years of good service and has performed extremely well for its price range.

All of the pictures on my website (www.j.g.hunt.freeuk.com) have been taken using this mount, with unguided exposure times ranging up to 2 minutes at long focal lengths (750mm) and 10 minutes at wide field focal lengths (50mm). The accuracy of the tracking does depend on how well you polar align and balance the scope. But to be honest this is great performance - I think I got lucky with a "good one" rather than a "bad one" when it came out of the Skywatcher factory.

I'm not really sure what to ask for it, so perhaps open to offers at this stage to see if anyone is interested.

I also have an 80mm Helios refractor and a Celestron 8" SCT which I could add to the sale if someone wants the whole setup (but I'm going to keep the 6" refractor definitely).

Reason for sale is upgrade to an EQ6Pro.

I can provide pics of the mount/scopes if you're interested.

Thanks
Jeremy
Posted by Anonymous at 5:41 pm No comments:

Email ThisBlogThis!Share to TwitterShare to FacebookShare to Pinterest
Labels: For Sale

Hello all. No time for a weekly update this week. Just a reminder that this Tuesday is our January meeting and you can catch up on all the latest news then.

The big news this week has been the fly-by of Mercury by NASA's MESSENGER Probe. The timing of the flyby provided us with our first look at the side of Mercury that was in darkness when Mariner 10 imaged the planet of 30 years ago. Emily Lakdawala has all the the latest analysis and images at the Planetary Society. 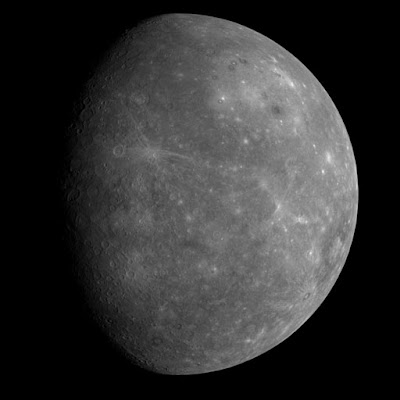 There has also been plenty of coverage at Bad Astronomy, Space Spin, Cumbrian Sky and Astroprof's Page to name but a few. More images at our January meeting.

Universe Today reports that Burt Rutan's X Prize winning company, Scaled Composites, has been found at fault for the explosion that killed three of it's workers working on the successor to Spaceship One.

Discovery of the 271st extrasolar planet TW Hydrae b was announced earlier this month. Meanwhile Centauri Dreams considers when we may be with respect to extra solar planets by 2020.

Also check out this week's Carnival of Space.

Nothing new to report this week. Full moon on 22nd January, so not the best time for deep sky observing even if the sky was clear. If you get chance check out Mars close to the moon tonight, and Saturn 3 degrees north of the moon on 25th January.

January meeting 29th January. I'll be covering the latest space and astronomy news and giving a short talk on the subject of Asteroids.

I'll also be asking for ideas for activities this year and asking you whether you can help out the society by joining the Committee. We are always in need of people to help out, and several of the committee members are struggling with other commitments at the moment. Being on the committee does not mean you have to stand up and talk, or know lots about astronomy. It's about using the skills and experience you have to help the society. You could help by; posting to CAS News, organising and storing society equipment, taking minutes at meetings, arranging guest speakers, looking after the society's accounts, writing articles for local press. I'm sure there are other things you can think of. . .

Look forward to seeing you on the 29th.

This week is the 211th meeting of the American Astronomical Society meeting in Austin Texas, and that means there's quite a bit of astronomical news items around this week Phil Plait at Bad Astronomy has been giving regular updates as part of the Astronomy Cast team.

Among other things Phil interviewed Chris Lintott from BBC's Sky at Night about the results of the Galaxy Zoo project. Chris explains in this video how the team have explained the strange results from the project that appeared to indicate more galaxies spin anticlockwise than clockwise.

Remember that asteroid that might hit Mars on 30th January ? Well, it won't! Further observations have allowed the orbit to be refined and now the chance of an impact with Mars is estimated at less than 1 in 10,000. Oh well . . .

Cassini has being continuing to map Titan with its radar imaging equipment, the last pass of Titan was on 20th December, Space Spin has the latest images which show strong evidence of flowing liquids.

More news from AAS this week was the announcement that the Hubble Space Telescope has found this double Einstein ring. Full story at Bad Astronomy. 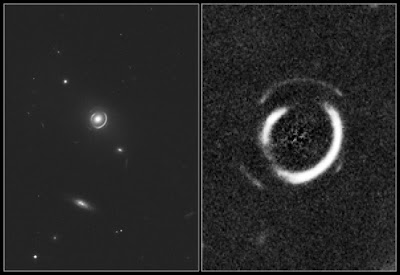 The Shuttle mission has been delayed again, and no won't launch until February.

NASA's Messenger probe will fly by Mercury tomorrow (14th January). Staurt has the latest images over at Cumbrian Sky as does the Planetary Society Blog. 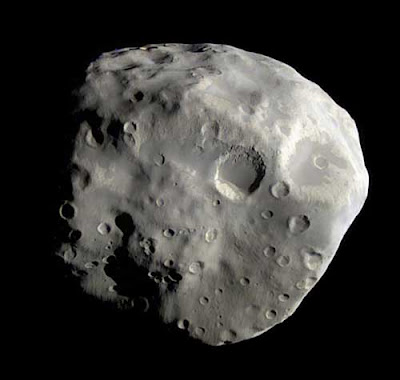 For the best of space and astronomy blogs this week check out the Carnival of Space.

Mars is well placed for observing at the moment, you'll find it midway on an imaginary line between The Pleiades cluster and Castor and Pollux in Gemini.

Next meeting is on 29th January. See you there.

Happy New Year to all CAS News readers. I said I would try and provide more regular updates this year by way of a weekly news round-up. So here's the first 'issue'.

I'll try and break down each update into three sections; space and astronomy news, observing news and society news. So here goes . . .

Spirit celebrates 4th anniversary: NASA's Spirit rover has just celebrated 4 years on Mars. This is a major achievement and is of course celebrated by Stuart in Cumbrian Sky and on Chris Lintott's blog.

Slim chance of meteor impact on Mars: There's a lot of excitement on the web about the possibility, estimated at about 1in 25, that a large meteor will impact Mars on 30th January.

Shuttle Launch delayed: The next shuttle mission (Atlantis) was due to launch before Christmas but has been delayed a number of times due to problems with a fuel sensor. Universe Today has the story.

Latest Cassini Image: The Cassini team have given us an early new year's present with this fantastic image of Saturn's moon Mimas as seen through the F ring. 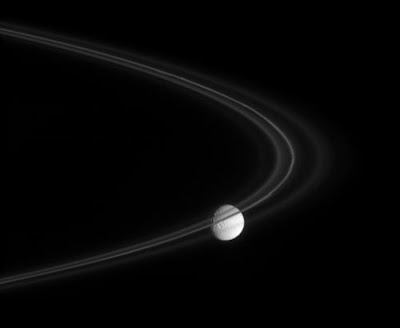 Descriptions of the background to the image at Tom's Astronomy Blog and Emily Lakdawala's Planetary Society Blog.

Look out for Comet 8P/Tuttle this week. Not as bright as the recent comet Holmes but still worth trying to track down in Cetus. Finder chart here.

Our next meeting is on 29th January usual time and place. We'll be covering a round up of the latest astronomy news, discussing our plans for 2008 and I'll be giving a talk on Asteroids.
Posted by Chris at 9:24 am No comments:

We meet in Cockermouth on a monthly basis. Meetings are friendly and informative, and everyone is welcome. All your questions are answered below. If you want to see what we’ve been up to recently check out our meeting reports. See also details of our regular observing events.

Where does the Society meet ?

We meet in St. Joseph's Church Parish Hall, Cockermouth. The Hall stands beside St. Joseph's RC church, which can be found between the Kingfisher public house and the famous Trout Hotel on the Workington side of Cockermouth. See directions or download a society factsheet with map.

When does the Society Meet ?

We meet on the final Tuesday of every calendar month, except for December when we hold a social event earlier in the month. Meetings begin at 7.30pm and finish at around 9.30pm. See our calendar for individual events.

How is the Society structured ?

We have a basic committee consisting of Chairman, Secretary, Treasurer and 3 or 4 other members. Everyone is a volunteer, and elections for our committee members are made at our Annual General Meeting, usually held in April each year.

What happens at meetings ?

Meetings are very informal, and usually comprise two or more short illustrated talks, usually given by members but sometimes by guest speakers, with time set aside for group discussion. There is a short break with refreshments mid-way through the meeting to allow members to chat with others about their own interests. Most meetings begin with a News Round-Up, followed by Society News and brief reports from committee members. See our Meeting Reports section for details of what we’ve been up to recently.

Who can join the society ?

Anyone! Absolutely anyone. Our doors are open to everyone, of any age and level of experience!

What kind of people are in the society ?

Although we have a respectable number of experienced and enthusiastic observers among our ranks, many CAS members are "absolute beginners" just starting to become acquainted with the wonders of the night sky. Some of our members don't even use binoculars yet. At the other end of the "spectrum" we have several keen and accomplished astro-photographers - people who take pictures of the night sky, some of which have featured in astronomy magazines.

Many CAS members are keen computer users, and we have a reguarly updated 'blog' which provides links to current astronomy and space exploration news items as well as

How much does membership cost ?

We have a flexible membership scheme with two options; you can pay up front for the full year to become a "Full Member", or pay for the meetings you attend as an "Associate Member". Full Membership is £15 for adults or £5 for children (under 16). Full Members have full access to borrow society library books and equipment. Associate Members pay £1.50 per meeting (£2 if there is an external guest speaker) or 50p for children.

Email ThisBlogThis!Share to TwitterShare to FacebookShare to Pinterest
Labels: About Us

Welcome to Cockermouth Astronomical Society. We are a small, friendly society based in Cockermouth, Cumbria with an interest in all aspects of astronomy and space exploration. If you are new to CAS the short presentation below should provide all you need as an introduction to us. Following that just get stuck in and explore the website.

Email ThisBlogThis!Share to TwitterShare to FacebookShare to Pinterest
Labels: About Us, CAS event, Introduction