A recent picture from the Mars Reconnaissance Orbiter HiRISE camera has revealed details inside a cave (or pothole as I would call it) on Mars. The cave was revealed in previously released images HiRISE images when the camera was looking straight down. Nothing more that a black hole with no discernible features was seen. 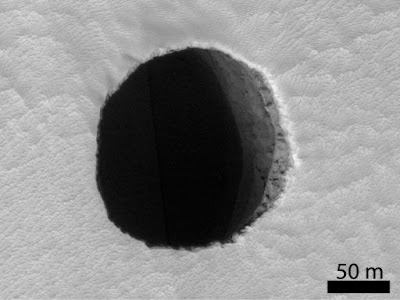 This latest image was taken from an angle and shows one wall of the pit illuminated by sunlight. This provides some details on the cave which is approximately 150m in diameter. For more on this try Emily Lakdawalla's post on the Planetary Society Blog.
Posted by Chris at 5:37 am