So I see I have been elected secretary…. That will teach me to miss a meeting! Many thanks for your vote of confidence; I will try my best to live up to it. 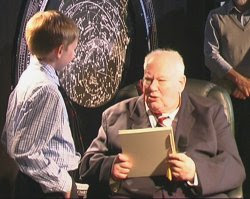 I did have an astronomically valid excuse for missing the AGM though as I was fortunate enough to be invited down by Sir Patrick Moore and the BBC to the Sky at Night 50th Anniversary party at Patrick’s house in Selsey. You can watch what happened on BBC1 tonight Sunday at the uncommonly early time of 11.10 pm (repeated 7pm BBC4 on Monday) and there is also a tribute programme at 4.45pm on the same channel.
The place was packed with the great and good of the astronomical and celebrity world but of course Sir Patrick was the Star of the show. Not even the presence of Lembit Opek’s “cheeky girlfriend” could tempt people away from him for long! Although wheelchair bound now, he showed remarkable stamina, keeping going non stop for the two days (The following day we continued partying after the BBC crew had departed)
On the way home I called in at the South Downs Planetarium in Chichester A fantastic resource, entirely funded and run by volunteers and not to be missed if you are down that way. They gave me a (quite literally) behind the scenes tour and very kindly gave me some books to swell our new library (duplicates from their very extensive collection) 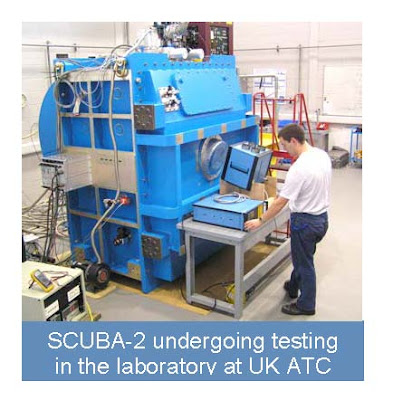 This weekend I attended my first meeting of the British Astronomical Association Variable Star Section held north of the border for the first time at the Royal Observatory Edinburgh. (Note to self, we must have a talk on variables sometime) It was an excellent meeting with several professional astronomers talking on Dark Matter, Exoplanet hunting and gravitational microlensing. I presented a poster paper on a possible microlensing event which seemed to be well received and one of the professional astronomers was interested in following up the work. The good news for CAS though is that it looks like I have secured a speaker for next year's programme! (More later)
We were also treated to a tour of the old observatory dome with its 36 inch telescope (sadly decommisioned but still impressive) and the highlight for me, a tour of the new instrument building facility where the SCUBA 2 submillimetre detector was being built, soon to be shipped to the James Clarke Maxwell Telescope on Mauna Kea, Hawaii. Gone are the days when astronomers used to take their instruments out to the the telescope in their hand luggage, this thing weighs four Tons and is cooled to almost absolute zero! Look out for result from it later this year. Perhaps we could arrange a tour of the ROE for as a society day out if enough people are interested.

Don’t forget the Astronomy at the Mountain Festival event on 19th May and if you have not yet booked tickets for Chris Lintott, don’t delay as they are now available to the general public.

Clear Skies
Robin
Posted by Robin at 10:19 am