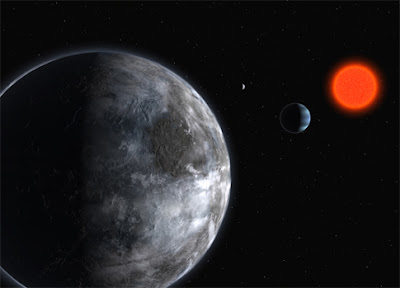 You've probably picked this news item up in the newspapers or TV news yesterday. Astronomers have found an "Earth-like" planet orbiting a nearby star Gliese 581. Speculation is rife that this planet may harbour life. It's worth just reflecting on just what has been discovered and what we know about this planet.

Firstly the planet was discovered using the radial velocity method which measures the 'wobble' induced in a star by planets orbiting it. The only real information this method tells us is the orbital period of the planet and the minimum mass of the planet. From this basic information you can calculate the distance from parent start and have a reasonable statistical estimate at the actual mass of the planet. So what have we got for this new planet ?

Well we know it's probably mass is around 5 times that of the Earth, it orbits the parent star in 13 days and therefore has an orbital radius of around 0.07 astronomical units.

Moving to the next bit of deduction. . . . because the planet is only 5 Earth masses, the assumption is that it is a rocky planet and has a roughly earth type density. Using that density allows you to estimate the size of the planet, and that comes out at about 1.5 times the size of the Earth. So far so good.

Because the parent star Gliese 581 is a red dwarf it is must less powerful that our Sun (about 50 times less powerful) and therefore the so-called habitable zone of the star is much closer. The new planet falls into the presumed habitable zone, with estimated surface temperature of around 0-40 Celsius. That means that if water exists on the planet it could be liquid and as we know liquid water might be essential for life. Therefore life is a possibility on this planet.

There is obviously quite a bit of speculation to get to some of the newspaper headlines you may have read. This discovery is very important for two reasons; firstly it is the smallest extrasolar planet discovered to date, secondly it is the only extrasolar planet discovered in the habitable zone of a nearby star. However, it almost certainly will not be the last. . . . .

For more comment on this discovery check out Cumbrian Sky, and Bad Astronomy.
Posted by Chris at 5:00 am No comments:

Just a quick reminder that this Tuesday is our April CAS Meeting and this month is our first Annual General Meeting. We will have some formal business to deal with, including election of committe members and approval of our society constitution.

After the formal business Chris will give a short talk looking back 40 years in Astronomical history to see what the state of knowledge was back then.

We'll also be taking further bookings for the Chris Lintott talk on 19th May at the Keswick Mountain Festival.

Hope to see you there.

Hopefully you've already got 19th May marked in your diary for a CAS Event, if not mark it now.

As part of the Keswick Mountain Festival we will be hosting a number of events in Keswick on Saturday 19th May. Robin has kindly done all the hard work organising this, and has managed to persuade BBC Sky at Night presenter Chris Lintott to come up and do a talk for us in the evening. Full details of the day's events are on this factsheet (pdf file).

Chris' talk, "The First Stars" will be in the Methodist Church Hall on Southey Street and will start at 7.30pm. Cost for the event is £4 (£3 for under 16) contact Robin direct at robin@cockermouthastronomy.co.uk to reserve tickets. Like all the events, the talk is open to the public, and we hope to see members from our fellow Cumbrian Astronomy Societies as well.

Weather permitting, we'll have a number of observing sessions during the day and on the Saturday evening. If you can attend and bring a telescope that would be a great help. Please let us know in advance if you can assist.

More details and further reminders nearer the event, and at our April CAS Meeting.