Our observing targets for this month are a some galaxies in and around the constellation Ursa Major, and locatable using the familiar Plough (or Big Dipper) constellation. The image below shows the Plough and indicates the location of our targets. 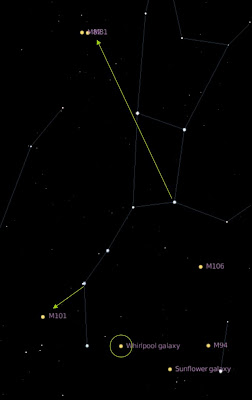 This pair of galaxies can be found be following a line across the diagonal of 'bowl' of the Plough and extending it the same distance outside the 'bowl' as shown in the diagram above. The pair are in the same binocular and telescope eyepiece field of view. With a telescope you will probably need to consult a more detailed star map to find them.

Another spiral galaxy at the other end of the Plough. Follow the trail of stars that lead down from the second to last star in the plough's handle (actually the pair of stars Mizar and Alcor). I'm not sure if you can see M101 in binoculars, I never have, but that's the challenge!

Also known as the Whirlpool Galaxy and one of the most impressive galaxies (especially in Hubble images). The galaxy is actually in the constellation Canes Venatici next to Ursa Major, but can be found from the last star in the handle of the Plough.
Posted by Chris at 7:13 pm