Lunar Eclipse from the Memorial Gardens 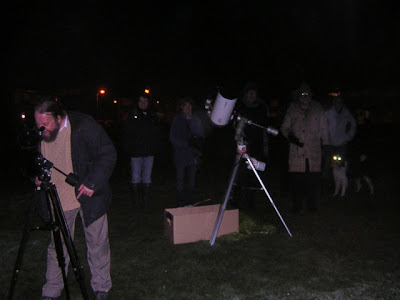 A select band of observers(including some youngsters who evaded the camera)plus dog enjoyed last night's eclipse from a rather muddy Memorial Gardens. Dave gave his auction bargain telescope an airing and I brought along the trusty Vixen.

While keeping an eye on the progress of a beautiful eclipse we took the opportunity to hunt down a couple of this months challenges M81 and M82. (81 was easily visible but 82 was a bit of a struggle, competing with the orange glow from the lights of Cockermouth. No comparison with the superb views hopefully we will get from our dark sky sight later this month)

Saturn was also a fine sight, flanked by moons Titan and Rhea, with Dione glimpsed close to the planet.
Posted by Robin at 12:04 pm