This month the main subject will be Galaxies. We'll be having a look at the various types of galaxies, how they form, and how you can see them yourself.

We will also follow up on our observing targets from last month, so if you have any pictures please bring them along.

And of course we will have a summary of the month's space news, and details of the upcoming lunar eclipse on 3rd March.

A Lunar Eclipse and Two Occultations

The Moon is set to make a few close encounters over the next few days.

On Saturday evening 3rd March it meets the Earth's shadow to produce a Total Lunar Eclipse. If it is clear the plan is to meet up in the Memorial Gardens Cockermouth to observe it from 9:30pm when the Moon will start to dim visibly. Total Eclipse is from about 10:45pm to midnight.

But before that, tomorrow evening Friday 23rd February the Moon encounters the Pleiades (The Seven Sisters or Subaru in Japanese), occulting (passing in front of) part of the cluster starting from about 10:30pm for the next couple of hours. The moon is 1st quarter so it should be good fun seeing the stars wink out as they encounter the unlit part of the Moon. This is a screen shot from Starry Night. Don't expect to see the Pleiades like this though! If you take any pictures, don't forget to bring them along to the meeting on Tuesday.

Then in the early hours of the morning on Friday 2nd March, the Moon makes a close encounter with Saturn. In fact depending on your exact location, you may see part of the planet hidden in what is known as a grazing occultation. This shows what Starry night predicts from Cockermouth at 02:41am. Grazing occultations of stars can be used to map the contours of the Moon as the star winks in and out between the hills and valleys.
Posted by Robin at 8:20 pm No comments: 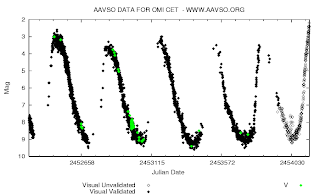 For much of the time, viewing Mira (Omicron Ceti) needs the help of telescope or binoculars so how come it has been given the honour of a proper name? Well the answer is seen every 11 months when Mira rises from obscurity to an easy naked eye magnitude 3 or occasionally, as is happening right now, to an unmissable magnitude 2. 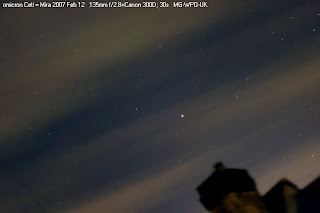 Visible in the south west just after it gets dark, Maurice Gavin took this snapshot the other evening. Why not try the same and then put a note in the diary to do the same one evening in October.

See what Jim Kaler has to say about Mira and if you want to find out more about variable stars, the SPA , BAA and AAVSO all have information about variable star observing and how you can get started, or catch up with me at the next CAS meeting

Don't forget that this weekend is our February observing event. We will meet on Friday night if it's clear, and try again on Saturday if it's not.

This month we will concentrate on our observing targets, M65 and M66 in Leo, Saturn and Titan, and the beehive cluster (M44).

Fingers crossed for some clear skies. 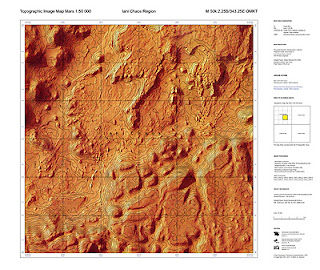 ESA have just released some reworked images from Mars Express shown as "hiking maps". That means they at recognisable scales and include the contour lines familiar to us on our trusty Ordance Survey maps.

The maps and full story are available on the ESA Website. I've had a good look but I can't see any pubs yet !
Posted by Chris at 6:32 pm No comments:

Engineers have completed the 18 hexagonal mirror elements for NASA's James Webb telescope, the replacement for HST. Together the mirror segments will form a 6.6m diameter mirror, much larger than Hubble's single 2.4m mirror. More details at this BBC News story.
Posted by Chris at 8:02 pm No comments:

There were sightings of a fireball at 8:30pm on 3rd Feb from as far South as Truro in Cornwall and (exluding this latest report above from Cockermouth which may possibly have been the same event) as far north as North wales.

The Society for Popular Astronomy keep a record of fireballs reported over the UK (Exceptionally bright Meteors) You can see the updated list here. and a link to how and what to report about your sighting The SPA forum also often has breaking news on such events.
Posted by Robin at 11:55 am 1 comment:

I received this report from someone reporting a meteor sighting close to Cockermouth . .

"Has anyone in your society receive reports of a meteorite falling to ground on Saturday 3rd Feb 7 around 9pm south of Cockermouth?

I saw it quite clearly from my car, not more than a hundred metre or more distant and all the way down to ground but saw no impact, green flames on the fireball and sparks coming off the tail were clearly visible. The fall at an angle of 45 degrees and in a North flight towards my car lasted no more than two, perhaps three seconds."

Did anyone see anything on Saturday ?
Posted by Chris at 10:03 pm 2 comments:

Email ThisBlogThis!Share to TwitterShare to FacebookShare to Pinterest
Labels: meteor

Most of you will probably have heard of the Bradford Robotic Telescope, sited in Tenerife, which allows armchair (well, keyboard anyway) photography of the night sky.

For those of you who haven't heard of it, go to http://www.telescope.org/index.php and check it out. It's free to register and you can submit your requests to photograph any object you choose using a variety of camera setups (wide-angle, galaxy-cam, etc.) The system is very simple to use and can produce very good results, although so far all of my images have been a bit below the standard I would expect from such good quality equipment.

Attached is a picture of M110, one of Andromeda's satellite galaxies. This was a 120-second exposure using RGB filters. The individual colour frames had drifted slightly so I aligned them manually in Photoshop and played about with the levels. The focussing was pretty poor as well, so I've reduced the image size and sharpened it a lot to "fill out" the stars - although this makes them rather bloated.
Posted by Anonymous at 7:31 pm 1 comment: 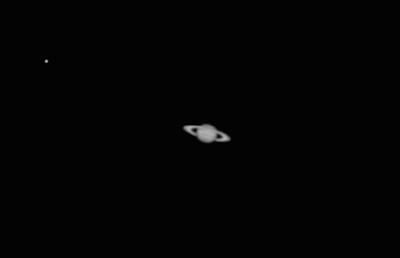 Titan is Saturn's largest moon and at 8th magnitude is easily visible in a small telescope or even in binoculars. This months challenge is to spot it and image or draw its position relative to Saturn. If you do this a few times this month you will be able to build up Titan's orbit (It takes just under 16 days)
I took this image last night ( 2nd Feb) using a webcam when Saturn was very close to the moon (less than half a degree away) It is a combination of two images, as Saturn was overexposed in the image exposed for Titan.

Sometimes the Moon passes in front of (Occults) Saturn as viewed from here. You can see a video I took of this happening a few years ago on my website.

The glare from the Moon prevented me spotting Titan in my 10x50 binoculars last night but I plan to try again tonight when the moon will be further away. It will probably be easiest with binoculars when it is furthest from the glare of the planet which is around 1st-2nd , 8-10th, 16th-18th, 24th-26th of the month.

On the 10th Saturn will be at opposition (ie closest to us in its orbit) and so will be at its biggest and brightest. Look out for the Seeliger effect around this date when the rings seem to glow particularly bright.

Good hunting and don't forget to bring your results to the February meeting
Posted by Robin at 10:58 am 2 comments:

Following Bill's excellent presentation on Astronomy Software at our January CAS Meeting, here are links to some of the software demonstrated;

As Bill mentioned all are available for free download.