It hard to believe it's not almost exactly a year since New Horizons started its 9 year journey to Pluto and beyond. The probe is now approaching Jupiter and this week has started it's official flyby mission aiming to gather data from the giant planet and its moons. 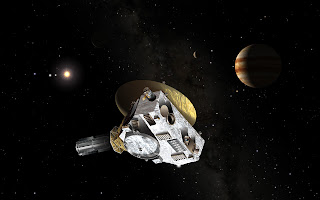 First images from the planet should be available over the next day or so. The plan is to make around 700 observations between now and June this year. Closest approach to the planet will be on 28th February.
Posted by Chris at 6:01 am