Over the christmas period the European Space Agency (ESA) launched the latest space telescope. The new instrument is called COROT (COnvection, ROtation and planetary Transits) and is designed to search to extrasolar planets and study the composition of other stars. 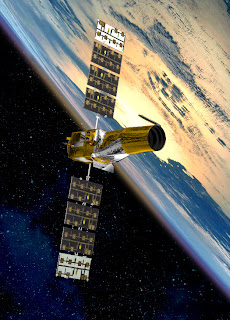 The telescope part of the instrument is a fairly modest 27cm (11 inches) which on the face of it is not much bigger than many amateur telescopes. It's coupled to 4 CCD imagers which are used to detect subtle changes in the brightness of stars. These changes in brightness could be due to transiting planets and it's that transit method that will be used to detect planets. The sensitivity is such that as well as detecting the usual crop of 'Hot Jupiters' the instrument should be able to detect a few earth-like rocky planets, down to around twice the size of the Earth.

The sensitivity to changes in brightness (luminosity) can also be used to study oscillations in stars and hence through stellar seismology learn something about the structure of other stars, for example calculating the size of the core of star.

The mission is lead by the French space agency CNES and can monitor 10,000 stars every 10 minutes! The observing mission will get underway in about a month's time, and is due to last around two and a half years.
Posted by Chris at 9:09 pm