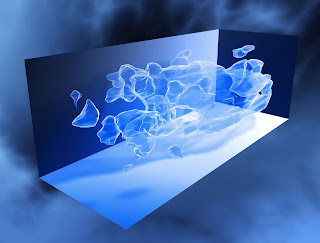 You've probably seen recent news articles about a 3D map of dark matter in the universe. This is clearly an important and interesting development, but what exactly is going on. Firstly, as Cumbrian Sky points out, there has been some highly inaccurate reporting. The topic even made the front page of The Independent with the, perhaps optimistic, headline "The universe gives up its deepest secret".

For a good description of the current finding check out this video and associated press release on the ESA Hubble site.

The dark matter concept goes back to 1933 when astronomer Fritz Zwicky first postulated that dark matter must exist in a cluster of galaxies to account for the rapid movement of the galaxies in the cluster without the cluster flying apart. In other words he calculated that there must be large amounts of invisible mass in the the gluster to hold the while thing together by gravity.

Current models seem to indicate that 'normal' matter, stars, planets, gas and dust etc make up only 5% of the universe. A futher 25% is thought to be dark matter and the rest is postulated to be dark energy. A recent development using the Chandra space telescope was the identification of dark matter in the bullet cluster.

The current story involves an extremely detailed survey of a small area of the sky around 9 times the size of the full moon. The survey mapped the location of over half a million galaxies and involved over 70 astronomers studying the results. By mapping the distortion of background galaxies due to gravitational lensing the team have been able to map the concentration of dark matter.

So this research supports theories about galaxy formation and the development of large scale structure of the universe. But the mystery of what exactly dark matter is, is still far from resolved.

For more discussion on the topic check out the posts at; bad astronomy, cosmic variance and asymptotia.
Posted by Chris at 6:44 am