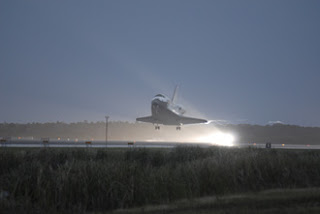 The Shuttle Discovery has returned safety to the Kennedy Space Centre in Florida after spending 13 days at the International Space Station. The landing had been delayed due to weather conditions at all the possible landing sites (a familiar problems for anyone trying to fly from the UK at the moment!).

The mission was another success for NASA with extensive rewiring work being carried out at the space station and a cargo of key supplies delivered. There was also an exchange of ISS crew members with American Astronaut Sunita Williams joining the space station.
Posted by Chris at 11:33 pm