Today marks the 10th anniversary of astronomer Carl Sagan's death. I'm sure, like me, many CAS News readers will have been influenced by Sagan's excellent talent for communicating science to the public. Through projects like the Cosmos TV series in the 1970s he reached audiences of millions around the world. 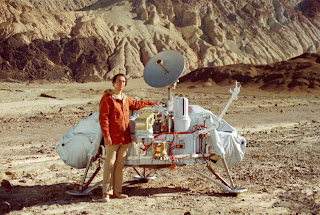 My main memory was Carl's lectures as part of the Royal Institution Christmas Lectures in 1977. He did a series of talks on 'The Planets' and included a life size replica of a Viking lander in the lecture. That series, and reading the excellent book 'Cosmos' definitely inspired my interest in astronomy at a early age.

His books and quotes continue to be an inspiration to many. In an era where astronomers have confused the public over planetary definitions, and the main PR is done by pictures from space probes, rovers and space telescopes, we could use more people with Carl's skill with words. Perhaps one of the most famous quotes highlighted this Voyager image of a distant Earth in his book Pale Blue Dot. 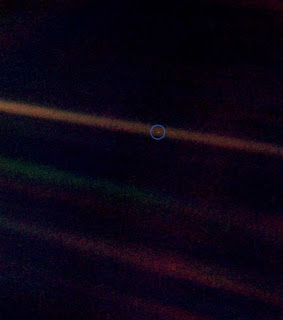 Perhaps a ideal quote to remember Carl by, and reflect on as the rest of us prepare to enter a new year.

Update: You will find lots of posts dedicated to Carl Sagan today as part of a Blog-a-thon to commemorate the anniversary of his death. Of particular note is the Planetary Society of which Carl was one of the three founder members.
Posted by Chris at 12:01 am