Yesterday NASA Administrator Mike Griffin announced that approval had been given for a final serving mission to the Hubble Space Telescope. This means that the space shuttle will make one last trip to HST in 2008 to carry out repairs and upgrade to the space telescope which is already over 15 years old. 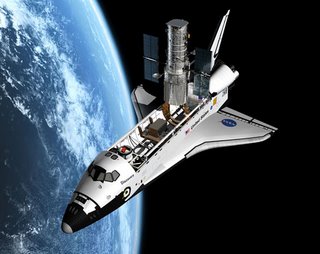 Among the planned work is fitting of a new wide field camera system, adding a new spectrograph and replacing the batteries and gyro systems that keep the telescope orientated correctly. In addition repairs to some of the existing systems will be attempted.

Hopefully those upgrades will allow Hubble to continue to operate until the Next Generation Space Telescope (James Webb Telescope) is launched. That's no earlier than 2013. In the meantime we can look forward to many more spectacular images from Hubble.
Posted by Chris at 6:24 am

Email ThisBlogThis!Share to TwitterShare to FacebookShare to Pinterest
Labels: Hubble