NASA's New Horizons probe is well into the first year of it's 9 year journey to Pluto (and beyond!). It has recently been scanning the road ahead with its Long Range Reconnaissance Imager (LORRI) camera and sent back images of it's next target Jupiter. 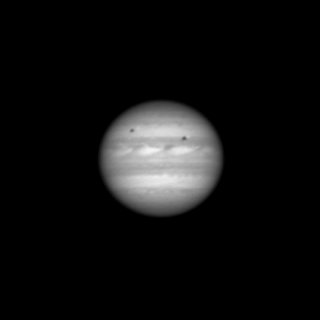 This image was taken almost a month ago now, when New Horizons was 180 million miles away from Jupiter. It shows Jupiter's moons Europa and Io, and their shadows crossing the planet in the northern hemisphere as seen from the probe. The spacecraft will be sending back more detailed images as it gets closer to the planet in January and February next year.