As Robin mentioned on Tuesday night, an international team of astronomer lead by the UK have recently discovered two new extrasolar planets. The project is called superWASP, WASP being "wide angle search for planets". The instruments used are essentially a collections of camera lenses, mounted on a telescope mount. This allows the team to image a very wide area of the sky each night. The data is stored, and then analyzed for changes in the brightness of individual stars. Instruments like the one shown below have a field of view 2000 times greater than a 'normal' telescope. 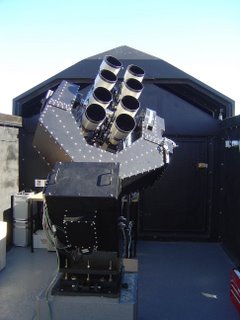 The planets are discovered using the transit method, detecting the drop in brightness as a planet passes in front of its star, as seen from Earth. The existence of the planets was then confirmed by a French instrument called Shopie, using the doppler spectroscopy method to detect the 'wobble' in the parent star caused by the planet.

The planets discovered orbit very close to there stars and are 'hot jupiter'. The planets have been named Wasp-1b and Wasp-2b, and are thought to be among the hottest planets yet found with temperatures around 1,800C.
Posted by Chris at 5:25 am