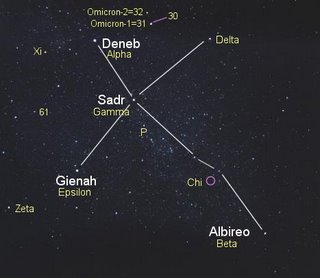 Anyone taken a look at the constellation of Cygnus, the Swan recently? (Almost overhead at the moment) It looks a little different with a "new" star appearing in the neck of the swan behind Albireo (The head) The interloper is in fact Mira variable star Chi Cygni which spends much of its time below naked eye visibility but every 400 days or so brightens to around magnitude 4. This maximum is brighter than usual and has been reported as high as mag 3.5. You can read more about Chi Cygni and many other interesting stars on Jim Kaler's website
Posted by Robin at 1:17 pm No comments: 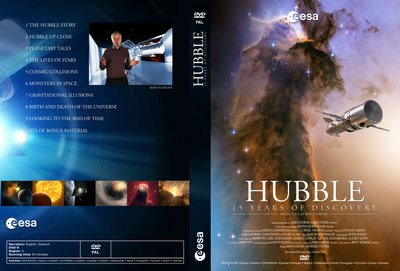 We don't normally meet in July but as an experiment we thought we would try it this year (OK we forgot to cancel the hall booking !) The date is next Tuesday 25th, usual time and place, so if you are fed up with all the sunshine and cannot face another barbecued sausage, why not come along?

As a special treat there will be the Cockermouth premiere showing of the European Space Agency's video celebrating 15 years of the Hubble Space Telescope (Very comprehensive covering the HST itself, the discoveries, life the universe and everything and of course some amazing images. All presented by Brit Bob Fosbury)
Posted by Robin at 7:38 pm 1 comment:

The Discovery shuttle has undocked from the International Space Station after its successful mission. NASA has cleared the shuttle for landing after numerous checks looking for damage to the all important heat shield. If all goes to plan the shuttle will land tomorrow (Monday).
Posted by Chris at 7:26 pm No comments:

Now two days into their mission, the Discovery crew have docked with the International Space Station and been welcomed aboard by the current ISS crew of two. Just before docking the shuttle performed a 'flip' to allow the ISS crew to photograph and video the heat shield on the underside of Discovery. This will be examined for evidence of damage to the heat shield. So far NASA report no evidence of significant damage. Full story here.
Posted by Chris at 7:07 pm No comments:

While the focus is currently firmly on manned spaceflight, NASA has announced names for it's next generation of exploration launch vehicles (that's 'rockets' to you and me!). These vehicles will take over from the space shuttle fleet when it is finally retired in 2010.

There are two types of launch vehicles proposed they now called Ares I and Areas V. Ares I, the smaller of the two, will be used to launch the crew exploration vehicle which is a beefed up version of the Apollo command module. Areas V is the heavy lift vehicle and can lift up to 286,000 pounds into orbit.

The names have been chosen to honour the past and look to the future. Ares is an alternative name for Mars, the space programme's future destination. The I and V designations are a tribute to the Saturn I and V rockets which were crucial to the early manned space programme.
Posted by Chris at 5:08 am No comments:

CAS News has now been going for 6 months (see the archives on the right hand side of the main page). In that time we have posted over 100 news items. Daily 'hits' on the site run to around 5, with a total of over 450 visits to the site since I installed the counter at the bottom of the page. In addition to that 17 people get CAS News via email. Headlines are also automatically posted over on the Cockermouth Astronomy Society main website.

We always need ideas for items, it's quite time consuming searching for items of interest and I'm sure I miss plenty. You can help, if you see a news story you think is worth sharing then let me know [chris@cockermouthastronomy.co.uk] and I'll post something. Perhaps there's a topic you would like to know more about, again just let us know.

You can also contribute by posting comments directly on the blog against a particular 'post'. Perhaps you've found some relevant links, or more information. Or maybe you just want to leave some thoughts on the topic. Leaving a comment is easy, just click the link at the bottom of the article which probably say "0 comments", but hopefully more.

Finally if you want to join those who get CAS News by email, just scroll down to the bottom right of the page, enter you email address and follow the instructions.
Posted by Chris at 5:01 am No comments: 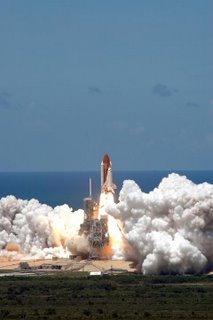 The crew of 7 is on it's way to the international space station to take supplies and drop of a new ISS crew member. They will also carry out more tests of procedures and equipment to ensure future shuttle operations are safe. Discovery is due to return to Kennedy Space Centre on 16th July.

NASA report that although several small pieces of foam fell of during the launch, these will not pose a threat to crew safety. Perhaps the pre-launch concerns about foam falling of the external fuel tank, as well as the 4th July launch has added to the publicity, giving excellent coverage. The launch was shown live on BBC News 24 channel.
Posted by Chris at 5:00 am No comments:

The search for gravitational waves

What are gravity waves ? 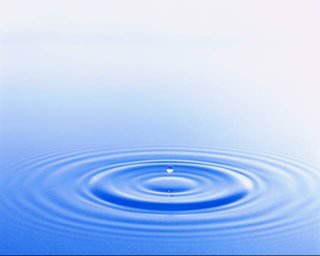 The easiest way to think of gravitational waves is as ripples in the fabric of space-time. If you throw a pebble into a lake you get ripples in the water surface - waves. Einstein's Theory of General Relativity predicts analogous ripples in space if large quantities of mass/energy are rapidly accelerated. Because gravity is a comparably weak force only huge events like the collision of two neutron stars or black holes are likely to generate gravitational waves of sufficient intensity to be detected on Earth.

How can we detect gravitational waves?

The effect of gravitational waves is very small and hence difficult to measure. A waves passing through the Earth would be expected to contract space in one dimension and expand it in another. But only by a factor of 1 in 10^21. 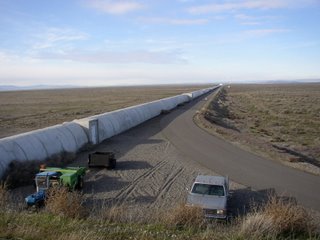 Detectors use laser interferometry to measure changes in distance over large distances. The Laser Interferometer Gravitational Observatory (LIGO) in the US uses two vacuum tunnels 4km (2.5miles) long at right angles to each other. A laser bean is split and directed up and back down each tunnel then brought back together. Any small change in the distance of either laser path is revealed by an interference pattern.

Over this distance the detectors are looking for changes in length of less than the diameter of a proton !

In order to remove false readings from local events like seismic activity etc two or more detectors separated by thousands of miles are needed. The LIGO facility has two sites in the US separated by two thousand miles. Add to that the GEO 600 facility in Germany and VIRGO in Italy and we have a good array of detectors, capable of detecting gravitational waves.

What could gravitational waves tell us?

Detection of gravitational waves would be further confirmation of Einstein's Theory of General relativity, and would tell us something about the predicted fundamental particle associated with gravity, the graviton.

We could also learn more about the universe, especially those catastrophic events such as colliding black holes. Perhaps the effects of the big bang itself will be detectable through gravitational waves still propagated through the universe (analogous to the microwave background radiation).

Gravitational waves observatories will potentially tell us more about the universe we live in and the laws that govern it. Unfortunately it will not provide spectacular images that capture the publics imagination, like Hubble does.

How you can help?

You can get involved in this research by signing up for the einstein@home project. Just like the well known SETI@home the idea is to use spare processor capacity on your home PC to analyse data from LIGO / GEO 600 and look for anomalies in the data. The processed data is returned to the project team for further analysis if necessary.

BBC Radio 4 news earlier this evening was reporting that Tuesday's launch was going to be postponed because a piece of foam had fallen off the shuttle. However, BBC News website is now reporting that the damage is not critical and NASA has decided to go ahead with the launch attempt anyway. More details and pictures at The Flame Trench.
Posted by Chris at 9:01 pm No comments:

Sunday's launch attempt for the space shuttle Discovery has been scrubbed. The next attempt will be made on Tuesday evening, that's 4th July. Fingers crossed for a successful Independence Day launch . . . .
Posted by Chris at 6:59 pm No comments:

Hubble Camera back on line

"NASA officials announced this morning [Saturday] that they were successfully able to restart the Advanced Camera for Surveys on the Hubble Space Telescope. The camera initially failed on June 19 because of power problems. Engineers devised a solution to switch the camera and two other instruments to a backup power system, and began uploading commands on Thursday. The space telescope will resume normal operations on Sunday night"
Posted by Chris at 7:46 am No comments:

Congratulations to Stuart who's Cumbian Sky blog has been selected as one of the Editor's picks of the week on the AOL Journals site.

I'm sure all CAS News readers are already familiar with Cumbrian Sky, but have you checked out Stuart's other blog The 'Verse which is dedicated to Stuart's own "poetry inspired by the universe we live in . . . ". Well worth a look.
Posted by Chris at 7:23 am No comments:

A hectic and frustrating afternoon . . .

Well I've just spent the afternoon and evening trying to keep an eye on the England Portugal quarter-final, Andy Murray at Wimbledon and the Shuttle launch countdown (live on NASA TV) all whilst trying to make the most of the good weather with a barbecue in the garden!

I'm sure you will have heard the football and tennis results by now, even if you are not interested ! The shuttle didn't get off the ground, the launch was postponed due to Electrically charged anvil clouds near the launch site. NASA will be trying again on Sunday evening, weather permitting, and there's no football or tennis distractions.

If you want to keep an eye on what's happening with the launch try The Flame Trench blog by Florida Today, for a blow by blow account. The blog reports that chances of bad weather postponing Sunday's launch attempt are as high as 60%, with prospects not much better for Monday.