One of the most talked about objects in the solar system at the moment has to be Saturn's icy moon Enceladus. It's even been giving Mars a run for its money!

We talked about the tiger stripes, and the active geysers, and even the possibility that the moon may have tipped over. Here are a couple of new views of the moon which emphasise the unusual features found there. 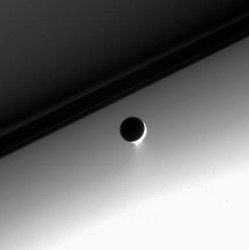 The first image, from Cassini, shows Enceladus against the dark side of Saturn. The plumes of water ice erupting from the southern polar regions are clearly visible in this enhanced image. The photograph was taken at a distance of around 1.3 million miles from the icy moon.

For a different perspective on Enceladus have a look at this picture by space artist Michael Carroll, showing what the moons surface might look like close up.