Just a quick round-up of some recent news items. 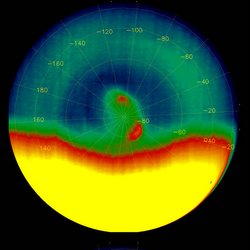 Venus Express continues to orbit Venus, now in its final orbit. It has returned images which confirm the expected 'double vortex' at the south polar region. More details in this Universe Today article.

NASA are still working on a solution for the Hubble Space Telescope ACS instrument. The camera failed on 19th June and although engineers believe they now know how to fix it they won't complete the repairs until 3rd July at the earliest. The repair plans have to be considered by a NASA review panel before being implemented.

Cassini has now completed half of its planned mission at Saturn. More details in this story.

Finally, if you're interested in Jupiter's Red Spot Jr we mentioned a few days ago on CAS News you can keep up to date with regular pictures at www.redspotjr.com.
Posted by Chris at 5:50 am