Neptune's moon Triton has always been a bit of a mystery, because it is in a 'retrograde orbit', that means it goes around Neptune 'backwards' compared to most moons in the solar system. A team of astronomers has recently published a theory to explain why.

The team believe that Triton was caputured by Neptune during a three body encounter in the early history of the solar system. They think Triton was actualy part of a binary planet system, very similar to the current Pluto-Charon system, which had a close encounter with Neptune. It's worth remembering that Triton is 40% bigger than Pluto, and has active geysers on it's surface. 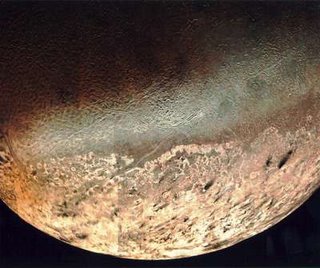 News has been pretty thin on the ground for the last week or so. I hope some of you have managed to find the Comet 73P/Schwassman-Wachmann 3 over the last few days, although the weather has not been ideal.
Posted by Chris at 5:13 am