Was Mercury formed by a massive impact?

Astronomers have know for years that Mercury is more dense than the other 'terrestrial' planets in the inner solar system. Why is this ?

Recent computer modeling work carried out at the University of Bern has provided a possible explanation. The team carrying out the research believe that a much larger proto-mercury was hit by a large body causing a massive impact, over 4.5 billion years ago. Their model shows that much of the material ejected into space could have been swept away by the sun's radiation before could fall back to the planet (a process which could take up to 4 million years). 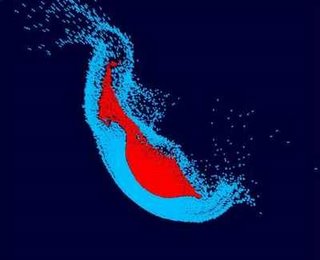 This would leave only the denser core of the proto-planet to form the Mercury we see today. Interestingly the material swept away could have found it's way to Venus and Earth. The team estimates up to 16 million billion tonnes (that's 16 x 10^19 tonnes if you prefer scientific notation !) could have ended up as part of Earth ! See press release here. 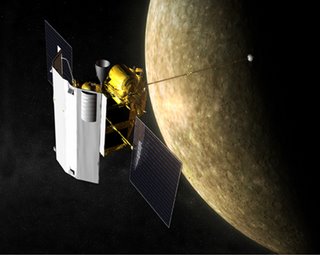 We should learn more about Mercury over the next few years as the NASA Messenger probe is on its way to the planet. However, the probe is taking one of the most indirect route of any spacecraft with one flyby of Earth, two Venus Flybys and three flybys of Mercury itself before finally going into orbit early in 2011 ! The spacecraft has already traveled over 1 billion miles. Full details of the mission are on the Messenger website.

This will be the first probe to visit the solar system's innermost planet since Mariner 10 in 1975.
Posted by Chris at 6:25 am