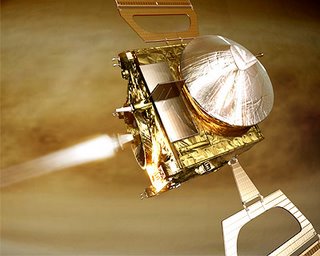 European Space Agency scientists and engineers are celebrating the successful arrival of Venus Express. Everything went as planned with the engine burn being exactly to time. All indications are that the spacecraft is healthy.

Because everything went so well the spacecraft has more fuel left onboard than originally planned, with mission engineering indicating there may be enough fuel for 4-6 years of operations. The initial mission is planned to last around 2 years (that's just over two Venus days !).

Initial indications are that the first data from the probe will be available within 48 hours. There will not be any spectacular surface images like we are used to seeing from Mars, but I'm sure we will learn plenty about Earth's sister planet. We'll have a full report at our April CAS meeting (that's Tuesday 25th April).