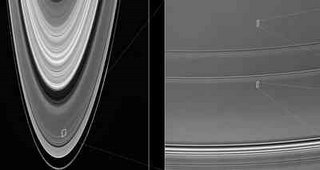 Scientists analysing Cassini images of Saturn ring system have discovered a new class of 'moon'. These moons lie within the ring systems and are only 100m or so in diameter, much smaller than moons like Pan and Daphnis which have been know about for some time.

The presence of these large objects (small moons) in the rings gives support to the theory that the rings were formed when a larger moon was ripped apart by Saturn's gravity. These moons would be the largest remnants of that body. 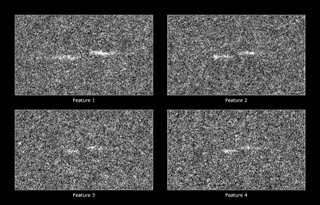 The 'mini moons' are not large enough to clear gaps in the rings, instead they leave what are described as 'propeller shape gaps' in the rings. It is these gaps that have been seen in the Cassini images and match computer models. Interestingly the images are not recent, they are among the earliest taken by Cassini when it first arrived at Saturn and crossed the ring plane. That ring crossing was the closest that Cassini will ever do, and hence the most detailed photographs of the rings we will get.

More details on Universe Today, and the Cassini website.