The first pictures from Mars Reconnaissance Orbiter have hogged the headline for the last few days, and Venus Express will hopefully be in the headlines for the right reasons this week. So, just chance to catch up with news from the explorers on the surface of Mars.

Opportunity has been spending many weeks at Erebus crater gathering data and sending back some spectacular images (see below). It has now left that area and is heading south for the impressive looking Victoria crater. This is the largest crater any of the rovers will visit (other than Gusev Crater, that Spirit has spent all it's time in, but that's a different order of magnitude all together !). 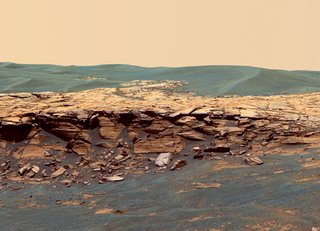 Image NASA - False colours are used to bring out subtle variations in colour in this image of Erebus crater. ]Click image for the full panorama]

Victoria promises to be an amazing place to visit. The crater is about half the size of the famous Meteor Crater in Arizona. For a preview check out Stuart's post "Victoria beckons !" on Cumbrian Sky. The crater is now just visible on the horizon of the latest pictures sent back by the rover (see here), but it will probably be around July before the rover reaches the crater.

Meanwhile Spirit is struggling. The rovers front wheel has seized and it needs to get to higher south facing ground to maximise the power from its solar panels during the Martian winter months. It is literally a race against time, the rover operators on Earth having to drive the rover backwards, dragging the frozen wheel behind. An unexpected bonus of this approach is that Spirit has revealed bright deposits just under the surface, as the frozen wheel digs a trench in the Martian soil.

As the rover races towards McCool hill, nowhere is the plight of the rover better summed up than in this poem by our friend Stuart.