Inside a nova star

A while ago we mentioned a nova star was visible in the constellation Ophiuchus. A nova is a star which suddenly flares up to several times its normal brightness. The star in question, known as RS Ophiuchi (yes I don't know how to pronounce it either!), is a recurrent nova which last flared up in 1985. The star is around 5,000 light years away. 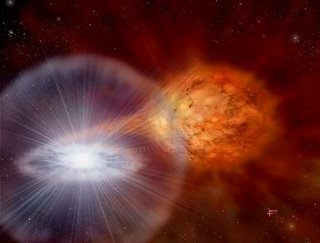 Astronomers have been studying the most recent event with a variety of instruments, and have recently released some of their findings.

RS Oph is a double star which consists of a white dwarf star (about the same size as the Earth) and a much larger red giant star. Astronomers believe that material from the red giant is falling onto the white dwarf, adding mass to it. Every so often enough material is present to fuel a runaway nuclear reaction. This results in the rapid and relatively short lived outburst we see from Earth. In the course of a day the stars energy increase to 100,000 times the energy output of our sun !

Early warning of this most recent flare-up was provided by amateur astronomers. This allows many of the worlds large ground based and space telescopes to watch the event unfold in a number of different wavelengths including; radio, X-ray, visible and infrared light. The amount of information gained is therefore much larger than any similar event in the past.

Analysis of these data has lead astronomers to conclude that the neutron star is actually orbiting within the 'wind' generated by the red giant, within the outer layers that the star is shedding ! High energy radiation emitted is thought to be due to the burst of radiation from the white dwarf interacting with the wind from the red giant.

This is an excellent example of how amateur astronomers can really assist in astronomy research. It also shows how a range of both ground-based and space telescopes can collaborate (at short notice) to observe the same event in different wavelengths. To quote the Royal Astronomical Society press release "26 February 2006 was a highlight of the observational campaign. In what must surely be a unique event, four space satellites, plus radio observatories around the globe, observed RS Oph on the same day."

See Robin's observations and spectra of the nova here .
Posted by Chris at 7:50 pm