Remember the catchily named 2003 UB313 (better known as Xena)? That's the Kuiper Belt Object discovered last year and determined to be bigger than Pluto, re-ingniting the whole "is Pluto a planet?" debate. 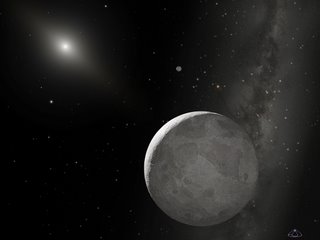 At the time astronomers calculated it was definitely bigger then Pluto, but possibly only just so. Earlier this year a team using data at radio wavelengths determined that it was a much as 30% bigger than Pluto.

Now the Hubble Space Telescope has imaged the object in enough resolution to allow its diameter to be measured directly. It turns out it is only just bigger than Pluto after all. 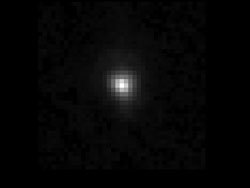 You may remember that the original estimate was made by assuming that Xena reflected all the light falling on it, to give a pessimistic estimate of the size. So the implication of the Hubble measurement is that Xena actually does reflect virtually all the light that falls on it. Technically it has an albedo of almost 1.0.

The only other body in the solar system we know of which does this is Saturn's moon Enceladus. We now know that Enceladus is so bright because it has active geysers depositing fresh ice on the surface. So the question is what keeps Xena so bright ?

Perhaps it would be useful to have a quick recap of what's 'out there' in the Kuiper Belt ? The picture below shows our current understanding of the relative sizes of the largest known Kuiper Belt Objects 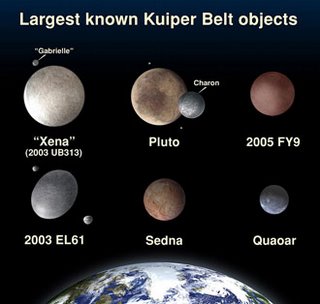 Image: NASA [click for larger version]
Posted by Chris at 5:05 am