Only two months since they were returned to Earth onboard NASA's Stardust probe, particles from Comet Wild-2 are revealing some surprising results. Scientists analysing the particles have found minerals which only form at temperatures over 1000 degrees C. Comets form in the outer reaches of the solar system far from the Sun, or any other heat source. So how did these minerals find their way into comets ? 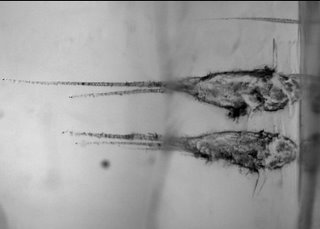 Impact tracks of particles in the aeorgel. [Image: NASA / JPL-Caltech / University of Washington]

At the moment there are two leading theories. In the first hot particles are formed near the young sun and blasted into the outer solar system in 'bipolar jets' also referred to as 'X wind'. These are jet of material expelled from the poles of forming stars along the axis on which the star is spinning. The second theory is that these minerals did not form near our sun at all, they formed in or near other stars and found their way into the outer reaches of our solar system as comets were being formed.

It's clear that there is much more to learn about the origin of comets and our solar system. Remember analysis of this material is still in its early stages, the material has literally on been on Earth for two months.

If you want more details on this and other Stardust results check out Emily Lakdawalla's reports from the Luna and Planetary Science Conference at the Planetary Society's blog.