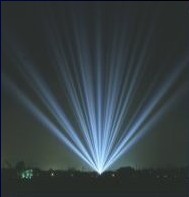 Last night I took advantage of a clear spell and started setting up to make some measurements on a star I have been monitoring as part of a British Astronomical Association observing campaign in support of professional astronomers. I was surprised to see dancing beams of blue light shooting high above the usual horizon hugging skyglow from the direction of Cockermouth.

Was this an unexpected aurora? Unfortunately not. It was a "Skybeam" the latest threat to our rapidly disappearing natural phenomenon, the stary sky. Keen to track down the source, I jumped into my car and set off in hot pursuit, but like the proverbial rainbows end, it proved elusive, seeming just as far away no matter how far I drove. I eventually tracked it down some 15 miles! away from my home and several miles beyond Cockermouth. Fortunately it turned out to be a temporary phenomenon to celebrate a 40th Birthday. Not wanting to appear a party pooper, I briefly explained the problems caused light pollution and made my exit, but it brought home to me how destructive of the night sky these devices are.

The BAA Campign for Dark Skies have successfully achieved the switching off of similar permanent beams at Guilford, Milton Keynes and Stockport under planning laws, but Barnsely town council is now seeking to legitimise such pollution as art and a "symbol of a 21st century market town" These temporary beams, should they become the latest craze could pose an even more serious threat to our precious night sky environment.

The irony is that the observations I was attempting to make were of a natural Skybeam produced by a Blazar powered by a pair of black holes hundreds of millions of light years away, in whose beam the earth is currently caught.
Posted by Robin at 11:00 pm