Saturn's tiny moon Enceladus (remember the 'tiger stripes' ?) has hit the headlines today with news that scientists have potentially discovered liquid water on the satellite.

We've heard a lot about Endeladus over the last few months, with confirmation that the moon of Saturn is 'active' and spewing out clouds of water vapour into Saturn's E ring. Scientists now believe that the mechanism for producing these eruptions may be liquid water just below the surface of the moon. This is exciting news because where there is liquid water, thoughts will turn to the potential for life.

Image Credit: NASA Images showing the plumes near the south pole of Enceladus.

However, let's not get too excited. We knew about the active 'geysers' months ago, and today's press release (timed to coincide with articles published in the magazine Science) only talk about 'potential liquid water' on Enceladus.

While we are on the subject of Enceladus, one of the surprises of the Cassini mission it has to be said, here is a new picture from Cassini of the moon crossing in front of Saturn. It reminds me of the classic "Io in front of Jupiter image" from Galileo 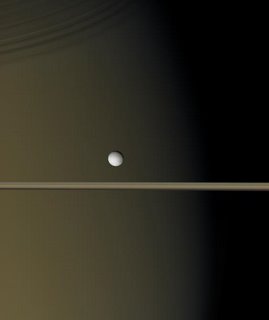 More details on the 'water on Enceladus' story on these websites;