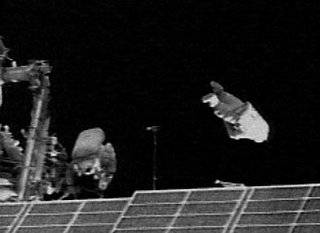 Well the radio transmitter equipped space suit SUITSAT was launched during last nights International Space Station EVA (space walk) .
Watching it on NASA TV as it drifted against the blackness of space and then with the Earth as a backdrop was very spooky; it almost felt like watching a person - reminiscent of the film 2001. More from NASA

Unfortunately the transmitter is struggling with low battery power due to the temperature, though NASA's news of it early demise are exagerated. I heard it faintly this morning on a hastily constructed antenna and others have since picked it up so there is hope for the project yet. You can watch the signal reports coming in here (I am G8DVW)

Update 5th Feb: You can listen to some recordings of the SUITSAT taken from aound the world on the website of US amateur AJ3U here
Posted by Robin at 3:05 pm