Mars Rover Spirit has now descended from the Columbia hills and is exploring a region named 'Homeplate' by mission scientists. [See this Cumbrian Sky Post for details and this one].

A close up below: 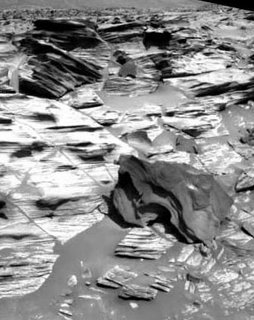 This image has just been released, which shows we are in for a treat over the next few months. The area is just covered with layered rocks which look like they are sedimentary rocks layered down by deposits from ancient lakes in the giant Gusev crater. Obviously that's the task of the scientists to determine the composition and origin of these rocks. In the meantime we can just admire the images, and imagine being there . . .