Cassini has imaged a spectacular storm in Saturn's atmosphere. The affects of the storm were first detected in radio wavelengths, by the probes radio instruments. The radio emissions are thought to be due to lightning 1000 times more powerful than storms on Earth! 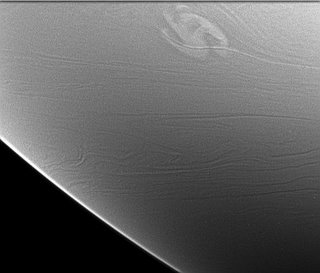 The storm itself is larger than the whole of the United States, it is the largest ever recorded on Saturn. The storm was actually first imaged by amateur astronomers near Paris, before Cassini captured this image. At the time of detection the probe was on the night side of the planet. The image below is the same Cassini image 'reprojected' to represent the view from directly overhead and enhanced to show the fine details of the storm. 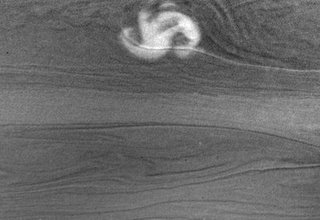