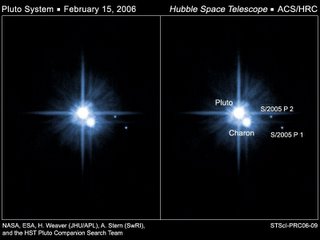 The moons have been shown to be in the same orbital plane as Pluto's main moon Charon. This leads astronomers to believe that all three moons formed at the same time, rather than the smaller moons being captured later, as is the case for the smaller moons of Jupiter, Saturn etc.

A theory being proposed now is that the three moons were formed during a massive collision between Pluto and another large body. As result pieces were separated from Pluto and became the moons, in much the same way most astronomers believe our own moon was formed. There is even talk of Pluto having rings!

The next step will be to name the new moons. Of course the debate still continues as to whether Pluto is a planet or not. . . . .