A recent announcement by a group of German astronomers has added further weight to the argument that 2003 UB313, the object found orbiting 3 times further from the sun than Pluto, should be officially called a planet.

Already dubbed 'the 10th planet' by many, UB313 was initially thought to be slightly larger than Pluto. Recent observations and calculation now put the object diameter at approximately 3,000km. Pluto is 'only' 2,600km in diameter. The picture below shows the relative sizes. 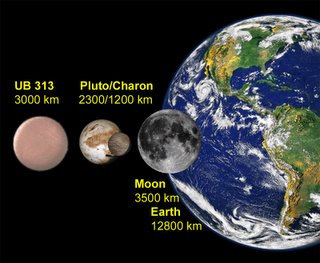 This new size estimate is based on a new assessment of the objects reflectivity at radio wavelengths. See this Universe Today article for more details. Also this website contains more details from the German team. There's also an excellent article "How big is 2003 UB313" on the Planetary Society's website which sumarises all recent studies.

One question that might occur to you is - "If we can discover over 160 planets around other stars, how come we've only just found the 10th planet in our own solar system?". It's a good question, and one we'll answer in our 'Extrasolar Planets Update' at our March CAS meeting.