Late last year a few CAS members met up with a few members of the Eddington Astronomical Society for a trip to the Bradford IMAX cinema to see Magnificent Desolation, a fantastic 3D IMAX film about the Apollo moon landings. That really was a great inspirational film. See the review on Stuart's Cumbrian Sky here.

Now another space related IMAX film is on its way. Roving Mars is, not surprisingly, about the Mars Exploration Rovers Spirit and Opportunity. The rovers have been 'roving' for around 2 Earth years (just over 1 Martian year), well beyond their original planned mission duration. 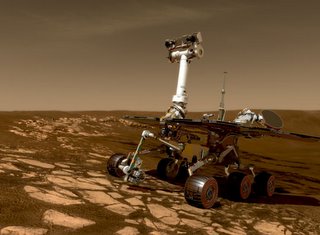 The film is essentially a documentary of the mission to date including design and build of the rovers, launch and landing. It includes pre launch footage, interviews with key mission staff, animations and actual pictures from Mars.

To be honest, the movie sounds like it's not quite as breathtaking as Magnificent Desolation, see this review at Planetary Society Weblog, but is still recommended viewing. Perhaps we should organise another Bradford trip.

Something to discuss on Tuesday night, at our January meeting ?